Astronomy fans, five aligned planets are visible in the early evening sky for ten days in October. Department of Physics and Astronomy Senior Scientific Officer Adam Joyce shares what to expect from this spectacular line-up.

Look up to the skies tonight and you might see a rare celestial show as it is broadcast live - the alignment of the five brightest planets in our solar system. 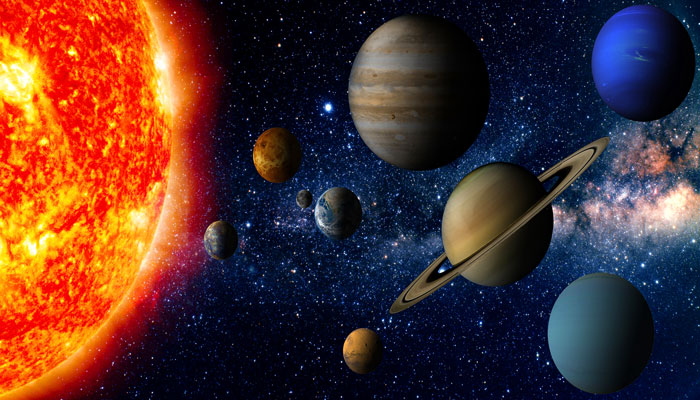 Venus, Mercury, Jupiter, Saturn and Mars are lined up from the western horizon to the zenith (the highest point in the sky directly above you) between 10-20th October. If the weather is clear, it will allow us to share a view thousands of generations of amateur astronomers have been witnessing from our shores.

As the sun sets, the brightest objects in the night sky appear first.

In light-polluted urban areas, the evening show is not as spectacular as in a rural dark sky but the planets are not as affected by this as the stars are.

This phenomenon is well timed for us due to the orbital periods of each of the planets and the inner planets, Venus and Mercury, trailing the sun at the moment.

Venus, the hottest planet in the solar system, is a bright crescent on the western horizon for roughly half the year when it trails the sun. Otherwise, Venus can be viewed in the early morning eastern horizon as the sun rises, leading us into the day. Fantastic sight: The five planets will not align in the night sky again until July 2020 but will be much further spread out.

Mercury is next in line and although it is the smallest of these planets (sorry Pluto), it is still an important cast member of this show that was recently thought to be the perfect example of the innermost planet in a solar system - a small, rocky and hot planet.

However, exoplanet hunters and, most notably, the Kepler Space Telescope have revealed this is not quite true, with all types of planets located closest to the parent star.

You can see a fantastic video showing the exoplanet systems the Kepler Telescope has found to date here.

Astronomy fans will also be able to see Jupiter, the king of the planets. As the largest planet in the solar system, it is no wonder it was an obvious target for Galileo more than 400 years ago.

Galileo's observations of the four largest moons of Jupiter - Io, Europa, Ganymede and Callisto - led them to be known as the Galilean Moons.

The planet's Great Red Spot is another key attraction when viewed through a telescope. Spinning storm: The Great Red Spot on Jupiter taken from the 16" Telescope at the Macquarie University Observatory located on campus.

Saturn is the penultimate planet in the line-up but still brings in the ratings. It is the most requested object at the Macquarie University Observatory because of its spectacular ring system that is clearly visible with a moderate-sized telescope. With a high-power telescope, and a good eyepiece, the division in the ring system can be seen - the largest of which is known as the Cassini Division.

Its namesake, the Cassini Mission to Saturn met an inauspicious end in September 2017, when the Cassini probe was crashed into the planet so as not to contaminate any of its moons which may harbour life.

Finally, the last member of the cast in this celestial show is Mars. Thought once to be home to a vast network of canals due to a mistranslated description of the surface by Giovanni Schiaparelli in the late 19th Century, it is in the headlines once again due to space entrepreneur Elon Musk's vision to colonise the planet.

Due to a wide dust storm on Mars, the planet's details have been hidden from keen observers for the last few months, although with the storm starting to recede, it is high in the sky and perfect for eyepiece viewing and imaging over the next few weeks.

To view the five planets, it is best to find a location which has a clear western horizon - and some favourable weather. We are hoping for clear skies! If you have a telescope, get it out and have a look at all the planets in the same night. Failing that, a good pair of binoculars will also do a fairly good job of magnifying them.

For more information, and hopefully some images of tonight's event, head to the Association for Astronomy's Facebook page.