Stick with STEM girls, says mathematician Dr Sophie Calabretto who has been named one of the state's 'Top 5 Under 40' science communicators. 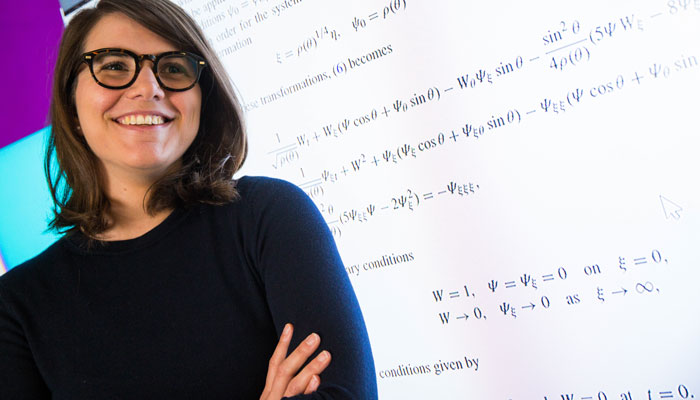 New careers in areas like robotics, biomechanics, virtual reality development and artificial intelligence will drive huge demand for maths skills in the next decade or so.

But mathematician Dr Sophie Calabretto says that Australia may not have enough people qualified for the jobs of the future.

“The number of people in general studying higher mathematics in this country is declining rapidly, and there’s even fewer women qualifying,” she says.

Australia’s National Science Statement this year showed that participation in science, technology, engineering and mathematics (STEM) subjects in Australian schools is declining, with enrolments in these subjects at the lowest level in 20 years.

Calabretto, from Macquarie's Department of Mathematics, says that there’s some stigma around people liking maths, and it’s characterised as an elite field.

“But these higher maths skills will prepare people for the jobs of the future. Anyone and everyone can love maths!”

This year, Calabretto was chosen as one of ABC Radio’s Top Five Under 40 science communicators from a field of dozens of Australian early-career researchers to work with ABC journalists producing new science stories.

She completed a two-week media residency in Sydney at ABC Radio National and has since produced a series of stories published by the ABC for Science Week.

“I did a video where I talk about the equations that govern all fluid flow, and a radio package that I put together about chaos in the weather that was on The Science Show, along with a range of other stories,” she says.

She hopes that raising her own profile about having an interesting career in applied mathematics can help break the stigma about STEM that exists for young women.

"We need more female role models who can communicate not just a passion for mathematics but also that mathematics can be applied in solving many of the challenges facing the world,” says Professor Jim Denier, head of the Department of Mathematics.

“As the language of science and technology, mathematics provides the way in which students of today will define their career of the future. Dr Calabretto speaks that language."

“One really important set of equations, the Navier-Stokes equations, govern the motion of all fluids and I’m interested in whether these equations capture all of the physics at play in this area,” she says.

Calabretto originally wanted to be an astrophysicist, but while studying physics she became fascinated with applied maths, in particular, how maths explains the movements of fluids.

“I try to relate maths to the real world and show how mathematics is the language behind all of the other sciences.”

She’s hopeful that her work as one of Australia’s top science communicators this year will help inspire interest and passion for maths in young people. Money laundering is big business in Australia
Australia has been cited as a nation that needs to do more to counter money laundering and tax avoidance, so why aren’t the authorities taking more action?