New shark-vision models show that many shark bites by great whites may be a case of mistaken identity, as surfing and swimming humans on the ocean’s surface closely resemble seals and sea-lions.

World-first research testing a simulated 'shark vision' model on swimming patterns of humans, seals and sea-lions, confirms theories that when great white sharks bite humans, it may be a case of mistaken identity. 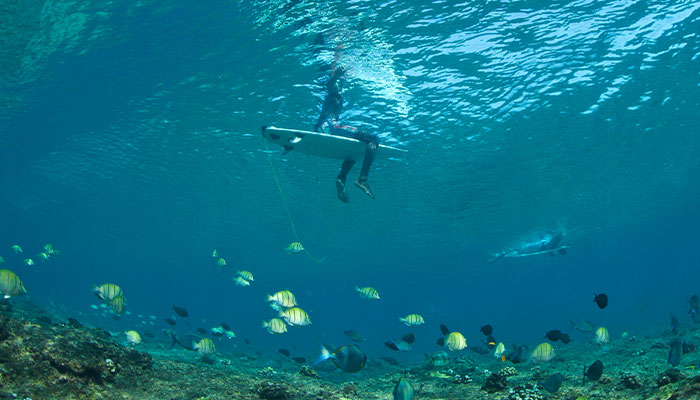 Underwater vision: To a juvenile white shark, when humans swim and paddle surfboards, they bear a strong resemblance to seals and sealions, the research found.

Great white sharks are also called white sharks – and together with bull and tiger sharks, they account for by far the most bites on humans.

“We found that surfers, swimmers and pinnipeds (seals and sea-lions) on the surface of the ocean will look the same to a white shark looking up from below, because these sharks can’t see fine details or colours,” she says.

Smaller surfboards might pose a more tempting quarry than longboards or even stand-up paddleboards to white shark.

Ryan – who remains a keen surfer despite her immersion in shark-bite research ­­– says this study will help the scientists better understand why certain sharks bite humans.

In response, scientists at the Neurobiology Lab are working on non-invasive vision-based devices to potentially protect surfers and swimmers from shark bites.

Ryan says that the latest study, published in the Journal of The Royal Society Interface, was a practical test that built on years of work by the team to understand how sharks see, by exploring the neuroscience of white sharks’ visual systems.

The team compared underwater video of rectangular floats, seals and sea lions swimming, humans swimming different strokes and humans paddling on variously sized surfboards in a large aquarium at Taronga Zoo, with both stationary and travelling cameras pointed toward the water surface. 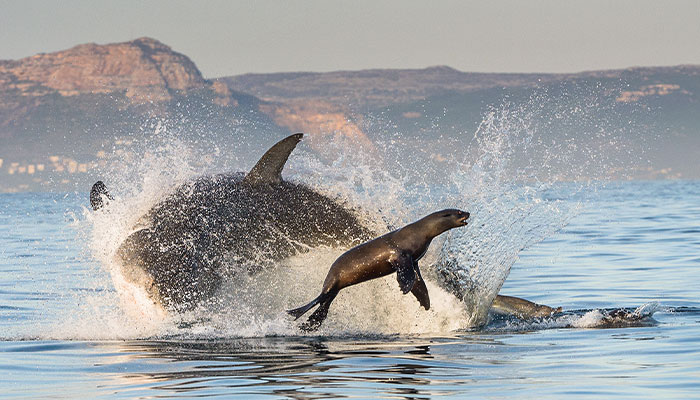 On the hunt: A great white pursues a pinniped ... the researchers were able to simulate the way that a juvenile white shark would process the movements and shapes of different objects.

“We attached a GoPro to an underwater scooter, and set it to travel at a typical cruising speed for predatory sharks,” says Ryan.

Back at Macquarie’s Neurobiology Lab, the team drew on extensive shark neuroscience data to apply filters to the video footage, and then create modelling programs to simulate the way that a juvenile white shark would process the movements and shapes of different objects.

“I didn’t realise being a scientist would involve quite so much coding,” admits Ryan – but the results were illuminating: to a juvenile white shark, when humans swim and paddle surfboards, they bear a strong resemblance to seals and sea-lions.

Sharks use a range of sensory cues to distinguish between different objects and zero in on their food, and these differ in sensitivity between shark species.

Smaller surfboards were harder to distinguish from the pinnipeds, so they might pose a more tempting quarry than longboards or even stand-up paddleboards to white sharks, who typically target smaller, young pinniped pups.

Most sharks are likely completely colour-blind, and the main visual cue for white sharks is the silhouette shape, so colours on boards and wetsuits are unlikely to change sharks’ impressions of floating humans.

However, the researchers are now exploring other ways to change the way that sharks perceive different silhouettes, including the judicious use of LED lights.

Shining a light on surfer safety

While the risk of shark bite is very low, Australia remains the world’s deadliest shark playground, accounting for six of the world’s 10 recorded unprovoked fatal shark encounters in 2020 alone. Incidents of sharks biting humans have risen over the past 20 years, and Ryan says that surfers may have a heightened risk because they spend far more time in the ocean than swimmers, often in deeper water.

“Sharks use a range of sensory cues to distinguish between different objects and zero in on their food, and these differ in sensitivity between shark species,” says Ryan.

White sharks are highly visual – and juveniles are more dangerous to humans than are older, larger white sharks which have better vision.

Professor Nathan Hart, who heads the Neurobiology Lab and is senior author of the research, says that white sharks must learn what to eat, and as they grow, their diet will change.

“When white sharks reach around 2.5 metres in length, their jaws begin to harden so they can take on bigger prey like seals,” he says.

“They need to develop a search image for these prey items and combine that with other sensory information; it’s a learning process that could be prone to mistakes."

While sharks can be dangerous, they are also endangered; and our fear of sharks, despite the low likelihood of bites, has led to prevention methods like shark nets and drumlines which further threaten marine life.

“Understanding why shark bites occur can help us find ways to prevent them, while keeping both humans and sharks safer,” says Ryan. 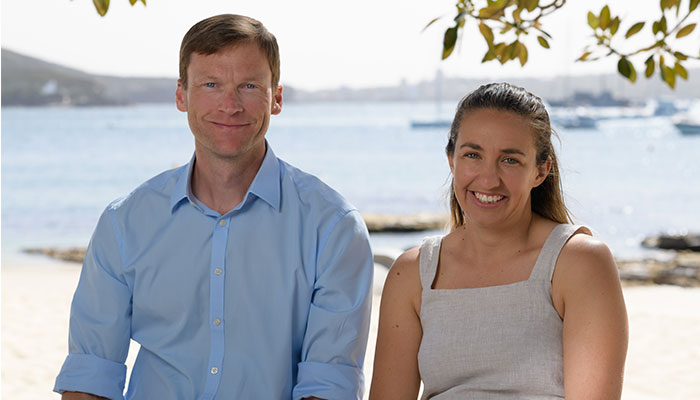 Dr Laura Ryan (pictured) is a post-doctoral researcher in the Department of Biological Sciences.

Professor Nathan Hart (pictured) is Head of the Department of Biological Sciences. Please explain: Why do sharks attack humans?
In the wake of NSW's latest shark attack fatality, Macquarie University’s Head of Biological Sciences, Professor Nathan Hart, explains why sharks don’t naturally hunt humans and how their poor eyesight could be to blame.