On the brink of extinction, a male primary school teacher speaks out

Based on current rates of decline, Macquarie researchers forecast that male primary teachers will disappear completely by 2067 unless policies are put in place that reverse the slide.

In the end, it seemed obvious that Steve Pryde should become a school teacher. Two of his grandparents had been teachers and, as the oldest of six boys, he could see in retrospect how much he had enjoyed playing a guiding role among his brothers. 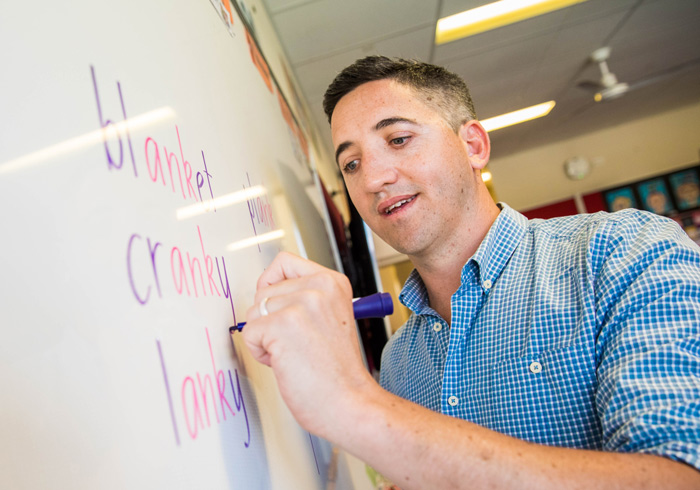 “It was probably the furthest thing from my mind when I was at school but I never took a step back once I made the decision to go into teaching – I’ve loved it,” says Pryde, who after a gap year overseas enrolled in teaching and, since his graduation nine years ago, has been at St Michael’s Catholic Primary School on Sydney’s lower north shore.

“I think clearly the best thing is helping kids develop and learn and we’d all like to think we’re good role models.”

At the co-educational school of about 550 pupils in the suburb of Lane Cove, Pryde, 34, is one of three male teachers, including the principal, out of a staff of 35. It’s a gender imbalance seen across primary schools, where nationally only 18.3 per cent of teachers are men.

It makes Pryde, according to a Macquarie University study, a member of an endangered species. Based on current rates of decline, the Macquarie researchers forecast that male primary teachers will have disappeared completely by 2067 unless policies are put in place that reverse the slide.

Kids are the future, and we want to give them the best opportunity we can

The flight of men from teaching is attributed to perceptions of low salary and status, and the idea that it’s “women’s work”. In high schools, 40 per cent of teachers are male although that number has fallen from 54 per cent in 1977, the study found, with a drop of a further 5 per cent expected in the next decade.

For father-of-three Pryde, who teaches year 6, the reasons he chose the profession are simple –  “I wanted to go on and help kids; I’ve thoroughly enjoyed it but I was definitely aware I wasn’t doing it for financial reasons” – but the solutions for reversing the decline are anything but, especially when Pryde is seeing a growing number of women leave the profession as well.

“Even in my nine years, the role has changed from purely teaching to wearing a few hats, which is probably a common factor as to why people are dropping out,” he says. “First and foremost, you always want to attract good teachers, the best teachers, male or female, to the profession and I’d like to think they’re going to find ways of making that happen, because kids are the future, and we want to give them the best opportunity we can.

“You’d also like to have a better balance of male and female staff in schools - but how they make that happen, I don’t have the answers.”

Pryde is not convinced the solution lies in paying teachers more, although he can understand how men, who traditionally see themselves as providers, could be turned away by the salary. (The highest-paid classroom teachers in NSW earn about $100,000.)

“If you’re driven financially, teaching’s probably not the profession you want to get into,” he says. “It’s not like the pay’s going to increase so much that someone wants to be a teacher for the money.”

Like the study by Dr Kevin McGrath and Dr Penny van Bergen, Pryde points to the importance of workplace diversity and having male role models in schools. Male teachers, for instance, can have a key role in helping boys develop their social skills, or in getting a naughty boy back on the right track.

“I think it’s important with kids to develop those social skills, to make some friends, and come to school happy,” says Pryde, who is also maths co-ordinator and facilitator of the St Michael’s program for gifted children. “In primary school it’s not the learning that comes first for me, it’s about kids being socially happy and wanting to come to school, and then you worry about the learning after that.”

The study authors point out that the gender of teachers has little effect on student achievement, but Pryde believes every school benefits from having at least a couple of men in the classroom.

“The male perspective is good for balance, both professionally from the staff point of view but also from the students’ point of view,” he says. “I think it would be a great shame if that’s not the case across all schools.” Building digital wisdom: how to spot unreliable websites
As the internet becomes more sophisticated and deceptive, how do we work out what are ‘good’ websites?