Why would anyone go into the family business?

Australians have long been fascinated by the Shakespearean succession dramas among families such as the Murdochs and Packers. But as we move into the peak Baby Boomer retirement years a crisis may be looming - who will take over the family businesses?

At the start of The Godfather Michael Corleone assures his future wife Kay that he won’t be joining the family business. A later scene reveals that Michael’s father, Vito, had hoped his son could pursue a political career rather than becoming a Mafia kingpin. Tragically, neither man gets his wish. Son and heir Michael Corleone with screen wife Kay: Like the patriarch of the fictional Corleone family, Vito, many business owners do hope that one or more of their children will carry on the family business.

Who’s going to run the shop?

Even if they will never hand on or inherit a family business, all Australians have an interest in family business succession issues being constructively resolved as often as possible.

That’s because no fewer 70 per cent of this nation’s approximately 2.1 million businesses – including behemoths such as (James Packer’s) Crown Resorts, Hancock Prospecting, Ingham Enterprises, Linfox, Manildra Group, Visy and Westfield – are family run.

Given Baby Boomers are both disproportionately likely to be business owners and poised to retire in large numbers over the next decade, there’s been surprisingly little research into what motivates individuals to take over a family business.

Dr Patrick Garcia, from Macquarie Business School, recently teamed up with academics based in the US, UK and Italy to examine the impact of parental behaviours on “next-generation engagement in family firms”.

For managerial control of a family business to pass from one generation to another the incumbent has to be ready to let go of the reins. And one or more of their children have to be willing to grab hold of them. The tendency, among academics as much as journalists and scriptwriters, has been to focus on the obdurate paterfamilias or, more rarely, materfamilias. One doesn’t have to think too long to bring to mind contemporary examples of King (or Queen) Lear types who are reluctant to cede control of a business to their long-frustrated offspring.

But Garcia suggests that the offspring’s perspective is also important to consider not just the parent’s motivations and goals.

“Even if it’s only after they are dead, many business owners do hope that one or more of their children will carry on the family business,” he says. “Research indicates individuals with entrepreneurial parents are more likely to be entrepreneurial themselves. However, many of them want to start their own businesses rather than take over one a parent or grandparent started. Studies done around the world indicate that less than seven per cent of the ‘rising generation’ want to take over the family business.” What drives next-generation engagement in a business?

Many a successful businessperson has been left perplexed by their son or daughter’s lack of interest in their patrimony. Often those sons and daughters themselves struggle to understand what motivated them to risk parental disappointment, or even disinheritance, to follow their own path.

While emphasising that there’s still much more research left to be done into why individuals do or don’t join a family business, Garcia makes the following observations.

Self-confidence is a double-edged sword

“This is the roots and wings paradox,” Garcia says. “Roots refers to family loyalty and wings refers to self-confidence, or to use the technical term, self-efficacy. Ideally, those two factors will settle into a healthy equilibrium. But sometimes a parent encourages a child to have strong wings and shallow roots, or weak wings and deep roots.

“Both commitment and competence are required if a child is going to agree to go into the family business then run it successfully. But getting the balance right with those two things can be tricky.”

Emotional manipulation is likely to be counterproductive

Many parents hope their children will follow in their footsteps and there’s nothing wrong with business owners also wanting this. That noted, Garcia says the research indicates that domineering parents who seek to exercise ‘psychological control’ by making care and concern dependent on their wishes being followed are inviting serious blowback.

“A parent providing verbal encouragement, emotional support, being a good role model and passing on their knowledge in a nurturing way is one thing,” Garcia says. “A parent trying to turn their child into a clone of themselves and not allowing them to develop as an individual is quite another.” 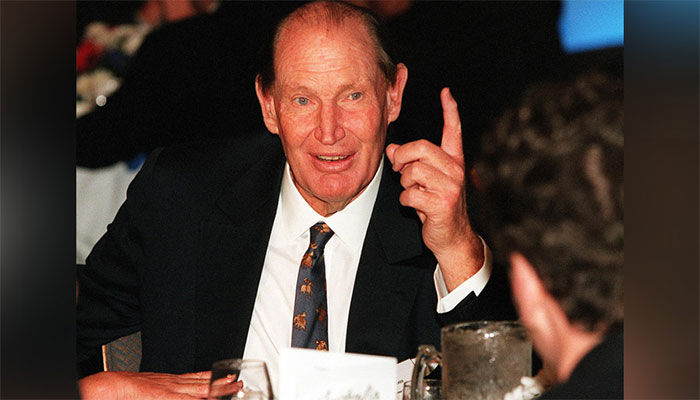 Abdication of reluctant heir: Australia's most famous entrepreneur, the late Kerry Packer took over the family empire after brother Clive refused to bow to paternal pressure.

At least one study showed children of domineering parents were disproportionately likely to “lack independence of thought and confidence, and to slavishly copy their parents’ practices even after they had lost relevance.”That’s hardly a mindset conducive to long-term business success.

Of course, there’s also the possibility of a much-abused child reaching their limit and storming off. Clyde Packer famously did this in 1970, leaving the way the way clear for his younger brother Kerry to step into the role of heir apparent.

Authoritarian parenting styles and filial obedience remain cultural norms in many nations. Up until relatively recently, they were not uncommon in this country. However, in the Australia of 2019, it’s far less expected or socially acceptable for a business owner to unilaterally decree a child will shoulder the burden of running the family business.

“Families and family businesses are impacted by the norms of the culture in which they exist,” Garcia says. “Decisions about whether to join the family business have always involved a trade-off between the desire for autonomy and the pull of family responsibilities.

"Running a family business isn’t easy. On top of all the standard business demands, scions typically need to maintain functional business and personal relationships with a range of family members. They also often have to manage staff eager to believe they’re the boss’s undeserving son or daughter. In societies where parents are expected to allow children to choose their career, it’s not surprising many of them opt to steer clear of the family business.” Budget blowouts and broken promises: how to avoid project failures
Cost overruns and delays are common on many major infrastructure projects. Research from Macquarie Business School looks at the high failure rate and what can be done to ensure future projects are on time and on budget. Not so sweet: chocolate, slavery and complicit corporations
The annual spike in chocolate sales over Christmas is an opportunity for consumers to reconsider who produces our chocolate and how, Macquarie researchers say.