The treasures of Elam, a civilisation gone but not forgotten

A digital dossier of artefacts collected by Macquarie University's authority on the art and archaeology of the Near East is putting the ancient civilisation of Elam back on the map.

From the ancient civilisation of Elam came a burst of social engagement that would, with many twists and turns, see some of the world’s first cities evolve into complex societies, kingdoms and empires. 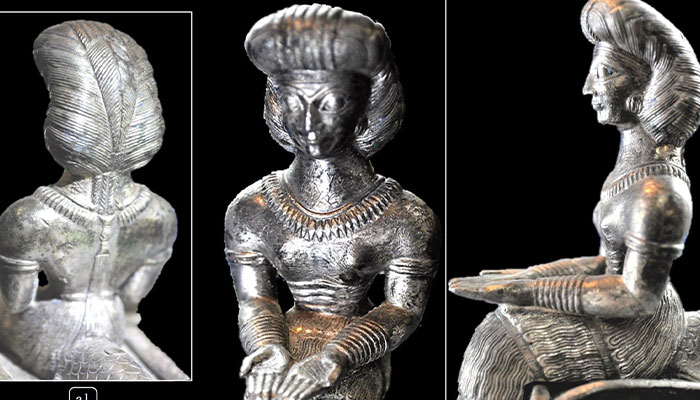 Awe-inspiring: Silver fish-lady from the two Elite female burials of Jubaji (c 575 BC), seated on the handle of a pan. National Museum of Iran, Tehran. Copyright: Javier Álvarez-Mon

Broadly encompassing the area in southwest Iran where today are found the provinces of Khuzestan and Fars, Elam and neighbouring Mesopotamia laid down the institutional and ideological foundations we came to associate with civilisation.

Yet Elam (c. 4200-525 BC) remains one of the least well-known societies of the ancient Near East.

Javier Álvarez-Mon, Professor in Near Eastern Archaeology and Art in Macquarie University’s Department of History and Archaeology, is working to change that.

His definitive 582-page tome, The Art of Elam (ca 4200-525 BC), represents almost two decades of work documenting and analysing Elamite artefacts in museum collections the world over and in situ at archaeological sites in southwest Iran.

As a result of this work, Álvarez-Mon has gathered the largest digital collection of Elamite art and artefacts in the world. It comprises 50,000 images, including monumental reliefs carved in open-air sanctuaries.

Rocking the cradle of civilization

“The Art of Elam conveys a visual account of the accomplishments of one of the most enduring cultures in the ancient world, emphasising the religious, political, and socio-cultural contexts in which art was created and used,” says Álvarez-Mon. Golden age: Painted pottery from the city of Susa (c 4000 BC), from the golden age of pottery production before the mechanisation of ceramic-making that emerged with the first cities and centralised states. Louvre and Iran National Museum, Paris and Tehran. Copyright: Javier Álvarez-Mon

Elam’s strategic position as a revolving door between Mesopotamia, 'the cradle of civilization', and the Iranian plateau shaped the character of Elamite art and society and conditioned its longevity.

“Some unique characteristics of Elamite art are monumental highland reliefs carved next to caves, waterfalls and atop mountain peaks and the showcasing of female religious and political elites,” he says.

Before the Iranian Revolution of 1979, the rich cultural heritage of Iran, a goldmine for ancient historians, was one of the most promising and prolific areas of archaeological research.

Today, collections of Elamite art are shared among the Louvre Museum in Paris, various museums and storage facilities in Iran.

But in the aftermath of the revolution, a large body of still unclassified Elamite material from excavations ended up largely unaccounted for in the storage vaults of the National Museum of Iran in Tehran and scattered throughout other museums and storerooms.

The ensuing invasion of southwest Iran by Iraqi troops during the Iran-Iraq war (1981-1989) forced the urgent relocation of numerous objects.

This phenomenal digital collection, then, was gathered against the background of Iran’s modern politics and the looting and destruction of world cultural heritage in neighbouring Iraq and Syria. Today, collections of Elamite art are shared among the Louvre Museum in Paris, various museums and storage facilities in Iran.

Javier Álvarez-Mon, born in Spain, was introduced to the Elamite world by Professor Pierre Amiet when he was a student of art history at L’École du Louvre in Paris. Elam showed up again at his doorstep, under the aegis of Emeritus Professor David Stronach at the University of California at Berkeley, an expert in the archaeology of Achaemenid Persia and a pupil of the famous Max Mallowan, husband of crime writer Agatha Christie. 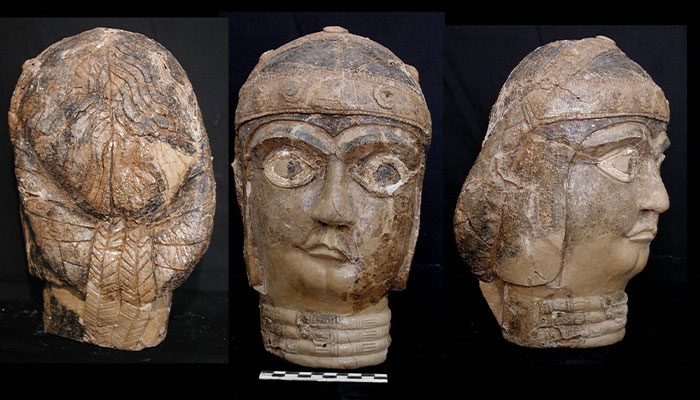 Álvarez-Mon explains the enduring appeal: “Elam differed from the contemporary cultures that emerged in the Nile valley and the lands of Mesopotamia in that its physical configuration was composed of agriculturally rich low-lying urban centres and prosperous highland pastoralist communities with access to desirable resources such as timber, stone and metals.

“It was a territorial composition that fostered a diverse, dynamic and resilient civilization.”

How does one go about amassing such a trailblazing trove of artwork? Three research scholarships helped!

Álvarez-Mon received a Fulbright-Hays Research scholarship in 2003 when a doctoral candidate at the University of California, Berkeley. First stops were the Musée du Louvre and Iranian museums to study more than 3500 years of material culture inaccessible to most scholars.

It was because of his scholarship, the personal networks he developed in Iran, and his Spanish background that he was able to access the collections.

His goal was to establish a digital catalogue to track, study and protect the precious cultural heritage of ancient Iran. 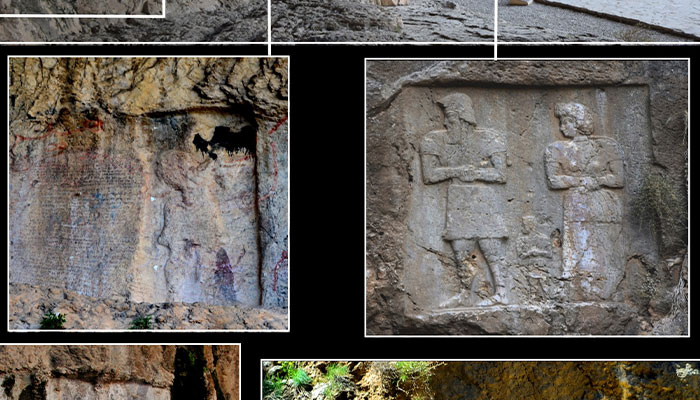 Set in stone: Monumental Relief from the Cave of Shekaft-e Salman (c 1200-800 BC) depicting the royal family and members of the Elite. Izeh, Iran. Copyright: Javier Álvarez-Mon

In 2006, Álvarez-Mon relocated to Australia to continue his research with a postdoctoral fellowship at the University of Sydney, and in 2014 he was awarded an Australian Research Council Future Fellowship (2014-18) and an invitation to join Macquarie University’s academic staff.

The most significant 'finds' in the collection, he says, are a group of Monumental Highland reliefs (presented in his 2019 monograph, The Monumental Reliefs of the Elamite Highlands) and other awe-inspiring material such as a golden 'ring' and a silver 'mermaid' found inside two elite tombs, which, dated to c 600-550 BC, foster an understanding of the genesis and development of the arts of the Persian Empire.

Álvarez-Mon would like to better understand the relationship between Elam civilisation (c 4200-525 BC) and the Persian empire (c 550-323 BC). Was Persia the heir to Elam? He is keen to explore artistic continuity between Elamite and Iranian populations, and the radical idea that the genesis of the Persian empire was a local and indigenous phenomenon.

In the meantime, Elam is yielding secrets beyond art. Álvarez-Mon recently turned his attention to Elam’s military underpinnings and entertainment traditions. Research in collaboration with Macquarie University Research Fellow Dr Yasmina Wicks has been featured this year in the University of Chicago Press’s Journal of Cuneiform Studies and, last month in The Conversation, an account of the world’s first professional acrobats, flipping through the Middle East 4000 years ago!

Write Álvarez-Mon and Wicks, “War chariots made their appearance in the ancient Near East around 1700 BC and by 1500 BC they had transformed the history of warfare. Using a combination of administrative tablets written in cuneiform text and war paraphernalia preserved in the archaeological record, our article unveils a previously unnoticed ca 1400 BC state-controlled arsenal of war chariots and weaponry that may help in understanding Elam’s resilience and rise as a military superpower in the 13th century BC.”

As the two researchers explain in their article, Elamite War Chariots and Military Equipment at Ancient Kabnak (ca 1400 BC), when put to action as a military vehicle, the chariot offered a dynamic mobile firing platform for Elam archers with a variety of offensive and defensive functions on and off the battlefield.

“Given that the advantage gained from the light chariot was primarily through its use as a mobile firing platform, armies that were already competent with the (composite) bow in battle – as the Elamite armies were – were in an excellent position to enhance their already formidable firepower.”

Elamite culture also developed a rich tradition of entertainment. One of the oldest depictions of a troupe of back-bending, stilt-balancing, hand-walking acrobats, and an ensemble of musicians performing together is engraved inside an Elamite bronze bowl from southwest Iran around 600 BC. This bowl was selected as Iran’s official national emblem for the 2021 Tokyo Olympic Games.

Driven by the thrill of discovery and inspired by both a father who was a mountain guide in Spain, a love and preservation of the natural world, and by art, Professor Álvarez-Mon seeks to bring his collection of Elamite art to the general public in an online museum dedicated to the preservation, study and promotion of Elamite civilization.

Javier Álvarez-Mon is Professor in the Department of  History and Archaeology at Macquarie University. 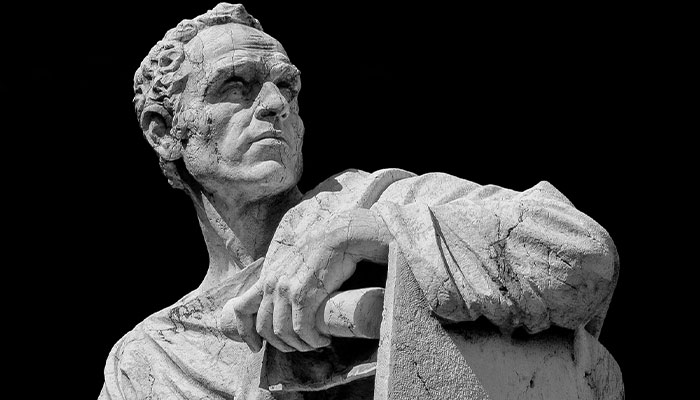 What was it like to be old in ancient Rome?
Can the ancient world’s attitude towards old age offer insight into how we might better approach it today? Ray Laurence, Professor of Ancient History at Macquarie University, explains. Flat-pack pods give wildlife a post-bushfire fighting chance
Flat-pack habitat pods developed by a Macquarie University scientist might be the salvation of small ground-dwelling animals trying to survive after bushfires.