Spoiler alert. In the opening scene of Crazy Rich Asians, a young Singaporean Chinese family arrives at the posh Calthorpe Hotel in London in the pouring rain. The hotel’s management, betraying an inherent racism, refuses to honour their booking, only demurring when the family matriarch makes a phone call which results in the family purchasing the hotel. That scene gestures towards a meta-narrative. For Crazy Rich Asians can be understood at a number of levels. At its base, it's an adequate romantic comedy, a boy meets the wrong type of girl romp of the ilk that has entranced us all since Shakespeare. It sets up family conflict, tugs at the heartstrings and generally takes the mickey out of its exaggerated setting and peripheral characters.

At another level, it offers an uncritical gaze at the super rich – painting a portrait of excess that enables the audience to pass judgement, but then humanising that excess with sympathetic renderings. Apparently even the one per cent enjoy dumplings as a family.

At another level, this is a Chinese story told by Chinese people. As we have been told incessantly in the lead up to its release, Crazy Rich Asians has the first all-Asian cast in a Hollywood movie since The Joy Luck Club in the 1990s.

Whilst there has long been a tradition of Chinese-American literature (Maxine Hong Kingston, David Henry Huang and Amy Tan immediately spring to mind), authentic depictions of the Chinese-American experience on the screen have been rare. Crazy Rich Asians is written by, directed by and portrayed on screen by that community. It does not tell all Chinese-American stories and may not resonate with all Chinese Americans, but then it never could, nor should (after all we don’t expect a single movie to be representative of all Anglo-Americans). But it is a much needed and long overdue representation, reflective of the new mediascape.

Political Scientist Benedict Anderson uses the phrase ‘imagined community’, arguing that any nation is a shared imagining – that there is no possible way that a collection of millions of people could understand themselves as a nation otherwise. He identified print capitalism – newspapers and books – as the tools of imagining, the mechanisms by which nations were written into being.

Today, digital technologies have reshaped the media and the new tools of imagining are built on and around the much more accessible internet. It’s no surprise then that those who had previously been excluded (women, people of different cultures, ethnicities, sexualities and abilities) are increasingly finding a voice. The increasingly shrill outrage from the old media about the rise of those voices (denounced as political correctness by the likes of Fox News, for example) can be understood as a pushback against loss of traditional privilege.

Not a mystical kung fu master in sight Read in that context, Crazy Rich Asians is to the Chinese-American community what Black Panther might represent to African Americans – a mainstream movie that transcends stereotype. Its characters are not the usual Chinese tropes. They are not mystical kung fu masters or drug kingpins. Instead, Rachel Chu (Constance Wu) is an Economics Professor at NYU, and a self-proclaimed banana (yellow on the outside and white on the inside).

When confronted with the deep prejudices of her boyfriend’s family and friends (largely around wealth and status), she struggles in that in-between space that she occupies, recognised as neither completely Chinese nor completely American. This is amplified by the film’s setting, a post-modern Singapore of designer clothing, luxury real estate and European supercars, a global city that is simultaneously everywhere but nowhere, distinguished only by its food. Ignoring the excess wealth around which the movie is wrapped, the settings and the characters represent Chinese characters as diverse, multi-dimensional and flawed. 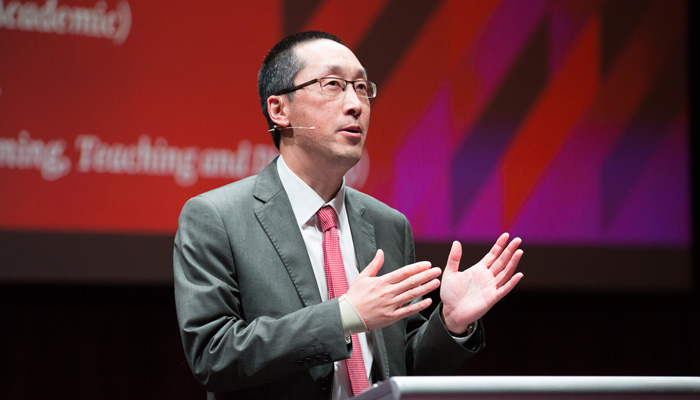 Laughs and recognition: A scene from Crazy Rich Asians, a Chinese story told by Chinese people.

As a movie, Crazy Rich Asians is entertaining. The audience at my screening responded with laughter, and for those of Chinese descent, recognition. But it is also a marker of cultural change, the significance of which will be tested with time and more Chinese-American (and Chinese-Australian) screen representations.

Whilst Crazy Rich Asians may not yet mirror the takeover of the Calthorpe hotel by the Young family in its opening scene, its success at the box offices suggests that there is a growing appetite for our imagined community to be properly diverse.

Sherman Young is a Professor in the Department of Media, Music, Communications and Cultural Studies. Review: Glad I'm not a Kennedy
How would any one of us act when confronted by extraordinary events or the demand to demonstrate our true values? Philosopher Robert Sinnerbrink reviews a new movie on a 1969 car crash that some say changed the course of American politics.