Its name means ‘to see’, and it has just taken its first observations.

Macquarie University’s Dr Christian Schwab is lead optical designer for a new extreme-precision instrument intended to measure the motion of nearby stars around three times more accurately than the previous generation of high-tech astronomical instruments. This will enable us to not only detect exoplanets the size of Earth, but determine their mass and characterise them.

Situated on Tohono O’odham Nation land in the Arizona-Sonoran Desert, exoplanet-hunting spectrograph NEID – the name means ‘to see’ in the Tohono O’odham language, and is also an acronym for NN-EXPLORE Exoplanet Investigations with Doppler spectroscopy – is now looking to the skies to discover Earth-mass exoplanets. The new instrument, an extreme precision radial velocity spectrometer, is collecting starlight on the 3.5-meter WIYN telescope at Kitt Peak National Observatory, a program of the NSF’s National Optical-Infrared Astronomy Research Laboratory.

The announcement of first light was made at a press conference held at the 235th meeting of the American Astronomical Society.

NEID’s first-light observations targeted the star 51 Pegasi, which in 1995 became the first sun-like star found to host an exoplanet. “First light is an important milestone in an instrument’s development,” explains NEID Project Scientist at Penn State University Jason Wright. “It is the first verification that NEID is measuring starlight as expected and is on its way to full functionality.”

NEID detects exoplanets by measuring the subtle effect these planets have on their parent stars. Planets tug gravitationally on the star they orbit, producing a small “wobble” — a periodic shift in the velocity of the star. This happens in our own solar system — Jupiter causes the Sun to move at roughly 47 km/hour, while the Earth generates a more sedate movement with a speed of only 0.3 km/hour. Because the size of the wobble is proportional to an orbiting planet’s mass, NEID measurements can be used to determine the masses of exoplanets. Current instruments can measure speeds as low as a slow walking pace of 3.5 km/hour, but NEID was built to detect even lower speeds — potentially uncovering Earth-mass exoplanets.

Schwab explains: “The optical design for this spectrograph was challenging, as we wanted to achieve practically perfect image quality over a very broad range of wavelengths, spanning from the ultraviolet to the near-infrared part of the spectrum.

“At the same time, the optics, with 300mm diameter lenses and a very heavy, custom prism, had to be built on a fast timeline. We came up with a novel design that delivers excellent images with fewer lenses, which makes it easier to stabilise it to the extreme degree required by the tiny exoplanet signals.” 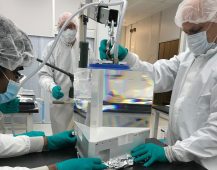 Already an impressive exoplanet-hunting machine, NEID becomes even more powerful in partnership with space observatories, such as the Transiting Exoplanet Survey Satellite.

“When we combine future NEID observations with data from spacecraft, things will really get interesting, and we will be able to learn what planets are made of,” says Wright. “We will know the planet’s density, which is a clue to understanding how much of an atmosphere the planet has; is it gaseous like Saturn, an ice giant like Neptune, rocky like Earth, or something in between — a super-Earth or sub-Neptune?”

To allow NEID to make these measurements requires extreme precision — and an equally extreme instrument. Starlight collected by the WIYN telescope is fed by an optical fibre to a purpose-built thermal enclosure encasing the NEID instrument. To ensure that NEID measurements remain stable over the instrument’s five-year lifetime, its optics are held at a fixed temperature stable to within a thousandth of a degree.

NEID’s scientific output will be further increased by making the instrument widely available to astronomers, in contrast to other precision radial velocity spectrometers.

Exoplanets discovered with NEID will help identify targets for follow-up observations with upcoming facilities like the NASA/ESA/CSA James Webb Space Telescope, which will be able to detect and characterize the atmospheres of transiting exoplanets. This makes NEID an important part of the ongoing search for other earths, and takes us one step closer to finding out if there are truly Earth-like planets elsewhere in the Milky Way.