We’ve all heard of April Fools’ Day, but its origins have been shrouded in myth and mystery – until now.

When it comes to the origins of April Fools’ Day, it seems the joke is on us.

Although some say it was first referenced in Chaucer’s A Canterbury Tales, and others attribute it to French poet Eloy d'Amerval, Macquarie historian Oswald M Patterson says a recent discovery indicates both theories are wrong. Instead, he says the origins can now be traced back to the ninth century. King or Joker? Ecgberht's subjects played pranks on April 1 - the anniversary of his coronation - to poke fun at his ego-centric reign.

“Eight years ago an archaeological team in Northumbria discovered a palimpsest (a parchment that’s been scrubbed and reused).

“Macquarie was fortunate enough to have it loaned to us for analysis, since we’ve developed a reputation for safely scanning artefacts without damaging them – and by using computer imaging techniques, we’ve been able to scan and detect traces of pigment that allow us to read what was originally written,” Patterson says. “And what we discovered was remarkable.”

It turns out the parchment’s original text outlined the troubled reign of King Ecgberht 1, a king of Northumbria who was installed by the Vikings after they conquered the region.

Up until now little was known about Ecgberht – but Patterson says the parchment portrays a vain ruler who was little more than a puppet that the Vikings knew wouldn’t become a threat.

“His subjects not only resented him because they hated the Vikings, but they also had little respect for him because he was so obviously ill-equipped to be king,” Patterson says.

“To make up for this Ecgberht began making exaggerated boasts – starting with the claim that more people attended his coronation than any king before him, which was highly unlikely.” 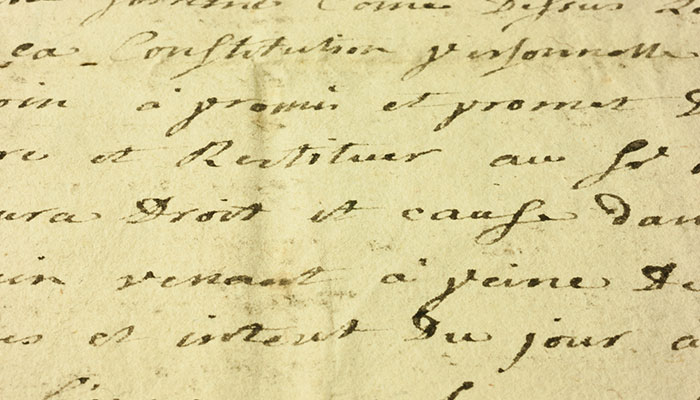 The truth is out: an ancient parchment has linked the first April Fools' Day to King Ecgberht, who was widely regarded at the time as vain and boastful.

King Ecgberht then made his coronation’s anniversary, which occurred on what would now be considered April 1, a holiday – and in a subversive gesture for the times, his subjects celebrated by playing pranks on each other to show what little respect they had for the king. Over time, this became known behind the king’s back as Fool’s Day.

“It’s hard to say whether King Ecgberht merely suffered from insecurity and incompetence, or whether mental illness also played a part,” Patterson says.

The town crier quit ... leaving the townspeople bereft of much needed news … and in its vacuum spread myths, lies and genuine fake news.

“After all, the parchment also mentions other odd incidents – such as the wall he wanted to create around the border. Ecgberht believed it would keep travelling craftsmen from other regions from stealing local jobs, even though the parchment states the town needed as many craftsmen as possible. In fact, that seems to be why the wall was never built – not enough craftsmen.

“The king’s attitude toward his female subjects was also offensive, as he would boast about grabbing them in the conch.

“And then there was his irrational hatred of the town crier. Whenever the crier said something critical of the king, Ecgberht would accuse him of making it up and lash him. Not surprisingly, the town crier quit soon after, leaving the townspeople bereft of much needed news … and in its vacuum spread myths, lies and genuine fake news.”

Don't believe everything you read

OK – by this stage you’ve probably realised this story isn’t true (and if not, you might need to get out more often).

Yet in addition to wanting to have some fun, we’d also like to point out that these days every day feels like April Fools’.

Now that the term “fake news” is applied to truthful stories that leaders don’t like, and when genuine fabrications spread like viruses through social media, it’s increasingly up to us as readers to use critical thought, rather than our biases, to determine what’s true.

It’s up to us to think carefully about what attribution is used, to support universities that conduct research, to support newspapers that conduct investigative journalism, and to read a story all the way through to the end before commenting and sharing.

If not, then every day will beome April Fools’ Day.