Macquarie scientist Dr Noushin Nasiri is fine-tuning years of research to develop a breathalyser that could potentially detect 22 different diseases.

Dr Noushin Nasiri is a materials scientist who has developed a radical new way to test for diabetes, asthma and some lung cancers. The test may also be able to be extended to certain other diseases including other cancers. 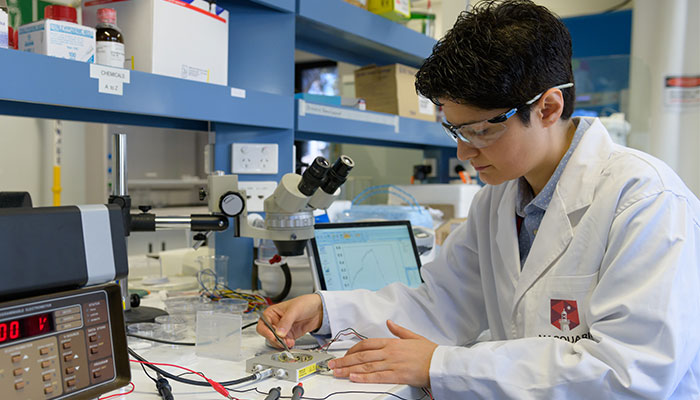 Big potential: the health information from Dr Noushin Nasiri's invention could ultimately be transmitted to a smartphone.

Dr Nasiri joined Macquarie University last year and has set up her own laboratory in the School of Engineering, where she rapidly gained attention for developing a sensor that can alert you to the level of ultraviolet exposure you’ve received from the sun.

But it’s Dr Nasiri’s latest invention that is wowing potential industry partners right now: it can rapidly analyse a person's breath and detect biomarkers (volatile organic compounds) that can so far potentially identify the presence of 22 different diseases.

The new device comprises specially-designed nanomaterials organised into an array of tiny sensors, which can collect information about what they detect and wirelessly transmit readings into a small computer which analyses the data and displays a result.

Dr Nasiri is working with experts in Macquarie’s engineering department to develop transmission and analysis tools. The data could potentially be transmitted to a smartphone, but would require the development of a complex app, she adds.

“We all know that our breath has evidence of last night’s garlic or maybe the wine you had at lunch,” says Dr Nasiri, adding that police breathalysers are the best-known example of detecting substances in our breath.

A non-invasive breath test that is inexpensive and very accurate, could make a real difference to people living with diabetes, particularly for some children who find blood tests can be traumatic.

“Human breath contains nitrogen, oxygen, carbon dioxide and water vapour, plus a tiny fraction - less than one per cent - of thousands of other gases in very small concentrations,” she says. “There’s evidence that certain combinations of molecules among those gases can indicate particular disease states.”

The idea of breath analysis isn’t new; the portable breath alcohol test device widely used around the world to vet driving and workplace violations was invented in 1954. The concentration of alcohol in the breath is about 2,300 times weaker than alcohol in the blood – but even that amount is comparatively easy to detect, says Dr Nasiri.

“Various disease states will leave only very small amounts of a biomarker, often a few parts per billion,” she says. While dogs and even bees have been trained to detect certain diseases based on tiny amounts of compounds in human breath, it hasn’t been easy to formulate breath detection for these low concentrations before. That’s where engineered nanomaterials come in. These are particles created by manipulating different substances at a molecular scale, often around one billionth of a centimetre, so they have certain physical or chemical properties. Nanosensors use nanomaterials that react to the presence of certain compounds or certain radiation types.

Dr Nasiri has developed a material that comprises a spongelike film of billions of nanoparticles made up of zinc, nickel and other elements, each with the diameter of a few atoms.

“The sensor has a chemical reaction on its surface when it detects certain biomarkers in your breath,” she says. “My sensor is extremely spongy and has a huge surface area, so it has a much greater chance of detecting a tiny concentration of chemical within a breath than a non-nano sensor could do.”

Dr Nasiri's breathalyser can show when a person has diabetes - but even better, it can also potentially show when glucose levels are awry.

Associate Professor Bernard Champion is an endocrinologist at Macquarie’s Department of Clinical Medicine where he specialises in a range of metabolic disorders including diabetes.

Diabetes occurs when your body doesn’t effectively use insulin to control blood glucose levels. Those with Type 1 diabetes do not produce insulin and must take it each day to stay alive, and monitoring their blood glucose levels is critical. Many type 2 diabetics have similar challenges, he says.

Without enough insulin, the body can’t convert blood glucose into energy and instead burns fat and muscle stores, converting these into ketones – but high levels of ketones in the blood can cause ketoacidosis, a dangerous condition that can put someone into a coma and even kill them.

Professor Champion says that there’s a long tradition of using the breath as an indicator in the disease.  “Before we had reliable blood tests, physicians would sometimes smell the breath of a person with diabetes – a fruity nailpolish smell indicated ketoacidosis,” he says.

Most diabetes patients regularly check their blood sugar levels with a finger-prick blood test. There are various other non-invasive monitoring systems around like flash and continuous skin-sensors with insulin pumps, but these tend to be expensive and don’t completely replace blood tests, Champion says.

“A non-invasive breath test that is inexpensive and very accurate, could make a real difference to people living with diabetes, particularly for some children who find the blood tests can be traumatic,” he says.

Depending on its accuracy and cost, Champion says that a simple and cheap ‘breathalyser’ type test could also be a real game-changer in diagnosing the growing incidence of Type 2 diabetes.

Studies have shown that early early diagnosis of non-small cell lung cancer followed by surgery is linked to five year survival rates around 70 per cent.

“Current population screening guidelines recommend testing all at-risk adults over forty every three years, but testing happens with only a small fraction of eligible people,” he says.

About half of all adults who currently have Type 2 diabetes are thought to be undiagnosed, he adds. “Often they have it for three to five years before it gets picked up, and by that time there’s more likely to be underlying damage,” he says.

Nearly 18 per cent of Australian adults could be ‘pre-diabetic,’ meaning that their insulin production is compromised – and studies suggest that without intervention five to ten per cent of these could progress to full Type 2 diabetes each year.

“With a simpler, more widely accessible and cost-effective, diagnostic intervention, there’s the potential to make big inroads in identifying people before they need to start using medication or become major consumers of the health care system resources,” he says.

One of the more exciting potential applications of the sensor is in the diagnosing certain lung cancers. Lung cancer remains the leading cause of cancer death in Australia, responsible for around one in five cancer deaths, and currently has a five-year survival rate of around 17 per cent.

Symptoms of lung cancer can be vague or even absent, so the disease is often not discovered until it has spread to other parts of the body and is found via during an XRay or CT scan performed to test for another condition. Around three-quarters of patients aren’t diagnosed until the disease has advanced to Stage III or IV.

Studies have shown that early diagnosis of non-small cell lung cancer followed by surgery is linked to five year survival rates around 70 per cent.

As with diabetes, there’s great clinical potential for a breath test that is simple and cheap and widely available to make a big difference in early diagnosis and to then markedly reduce the cost and improve the effectiveness of treatment for many types of lung cancer.

For the 2.7 million Australians with the chronic lung condition asthma, the device could also offer a more accurate way to monitor allergic response. Patients who have allergic asthma can have inflammation of their lungs for some time before their breathing is affected, but with earlier intervention of inhaled steroids, less medication would have a much greater impact.

There are already some specialist tests to measure exhaled nitric oxide, but these are expensive and used only by specialists, Dr Nasiri says.

Over the past year, Dr Nasiri has worked with other researchers at ANU, UTS, QUT and UWA to develop and test different gas sensing materials, and has made changes to her own materials to increase the sensitivity of the breathalyser tenfold.

Her technology can now detect compounds at a rate of two parts per billion. She has also finessed the device so that it is accurate at room temperature, so it will be cheaper to make and easier to use than her earlier models.

Dr Nasiri is now in discussion with potential industry partners to commercialise the invention and anticipates we could see a working model within five years. Smart UV sensor a world first to alert users to over-exposure
Researchers at Macquarie University's Nanotechnology Laboratory have made a tiny wearable device that could help millions avoid skin cancer. How do planes stay in the air?
Now that Qantas has flown into the history books after completing a record 19-hour flight from New York to Sydney, aeronautical engineer Byron Wilson answers the question on everyone's lips. 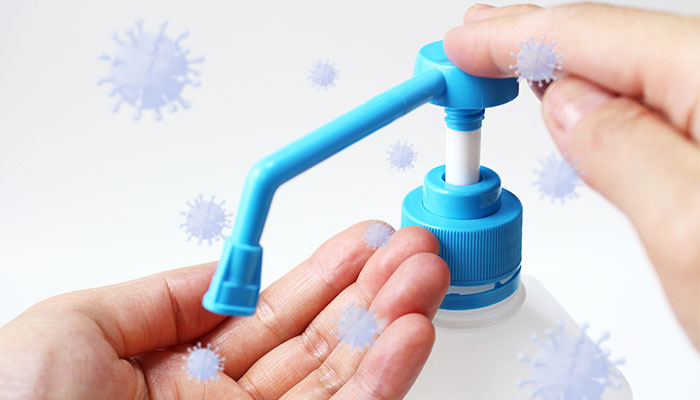