Why lockdown won't do: lessons from the Diamond Princess

We still don't understand mass diseases or how to respond to them, as the COVID-19 pandemic starkly illustrates, writes Dr David Baker of Macquarie University's Department of Modern History.

The number of 'confirmed cases' of the coronavirus is worse than useless, in the sense it is misleading for both policymakers and the public. 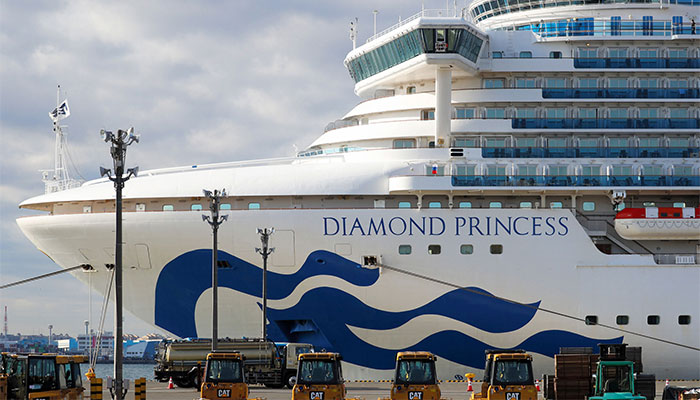 Meaningful example: the passengers and crew aboard the ill-fated Diamond Princess liner remain one of the best studied population samples of how quickly and efficiently the coronavirus can spread, says Baker. Image credit: cnn.com

So few people who catch coronavirus actually get tested, unless their condition is moderate to severe, or they are a medical worker, key public sector employee, or rich, powerful or a celebrity. In many cases, testing is voluntary.

Many ordinary people with mild to moderate symptoms do not get tested. Many more do not even know they have the disease. For historical comparison, most non-severe cases of the Spanish Flu also went untested and historians rely on fairly wide estimates today.

The passengers and crew aboard the Diamond Princess, a cruise ship that was held at Yokohama in February, remains one of our best studied population samples of how contagious the disease can be. Everyone was tested.

Thus far into the current pandemic, approximately 0.00228 per cent of the global population have died.

Most importantly, 331 out of 712 infected people or 46.49 per cent were asymptomatic at the time of testing, and it is unknown how many developed mild symptoms later; 381 people or 53.51 per cent showed symptoms of the disease. Only 37 or 5.19 per cent had symptoms so severe that they required intensive care.

At time of writing, 14 people or 1.97 per cent of the infected have died. Of those for whom we have information, all of them were in their 60s, 70s or 80s. The average age aboard Diamond Princess was 62 years old. The adjusted death rate for a general population age range is 0.5 or 0.6 per cent of those infected.

While the statistics for the actual population of Australia will not be clear until after the crisis is over, we may be sure the number of infected people is much higher than the approximately 7049 confirmed cases at time of writing. There will be large numbers of people who carried the disease and showed no symptoms.

Further still, there will be large numbers of people who showed symptoms but were not tested and whose self-isolation was 'imperfect' to say the least.

It raises important questions about whether the Australian lockdown happened in time (it didn’t). Or even whether the lockdown will make a difference at all.

This issue is exacerbated by the fact that travel from China was only shut down at the very end of January and significant lockdown procedures only began in March. There was a crucial two-month gap where the majority of the infected moved about the country conducting business largely as usual. More tests. less answers: vast potential numbers of unconfirmed carriers of COVID-19 in the community raises questions about whether testing is pointless once lockdown is loosened.

Historically, once a disease as contagious as COVID-19 enters a country, there is very little one can do to prevent the spread before it peaks around 20 to 30 per cent of the population.

Flattening the curve stretches out the period in which the infections occur and may insulate others, but the uninfected populace remains vulnerable to infection until a vaccine can be developed and widely distributed. For that we are looking at next year.

With such vast potential numbers of unconfirmed carriers of the disease, it raises important questions about whether the Australian lockdown happened in time (it didn’t). Or even whether the lockdown will make a difference at all, regardless of whether it ends next month or in six months from now.

It must be noted that if the coronavirus is as asymptomatic in so many people as the data suggests, then Prime Minister Scott Morrison’s three goals of better testing, tracking, and localisation may prove feeble, ineffective and pointless when the lockdown is loosened.

Perhaps worse than lifting the lockdown prematurely and seeing another spike of infections is the prospect of carrying on the lockdown for several months to no appreciable difference in the final tally of those infected before a vaccine arrives.

In either scenario, the level of outrage among those hundreds of thousands of Australians who will have lost their jobs, their savings and their homes, will be just as unprecedented as the lockdown in which we are currently living.

For one final historical comparison, the economic aftershock of the Black Death where the ruling class and wealthy elite left large swathes of the general population out to dry had one main consequence – revolt.

Hopefully those members of the Coalition government worried about the next election sees things in those terms.

Dr David Baker is a Lecturer in the Department of Modern History, Politics and International Relations.