The power of learning IRL: how hand gestures help kids – and adults – understand

Online education has done its job during the COVID-19 crisis, but Macquarie University research reveals how it can never match real-life learning.

As NSW students return full-time to their classrooms, Macquarie University research into gestures and how they help comprehension underscores the advantages of face-to-face learning. 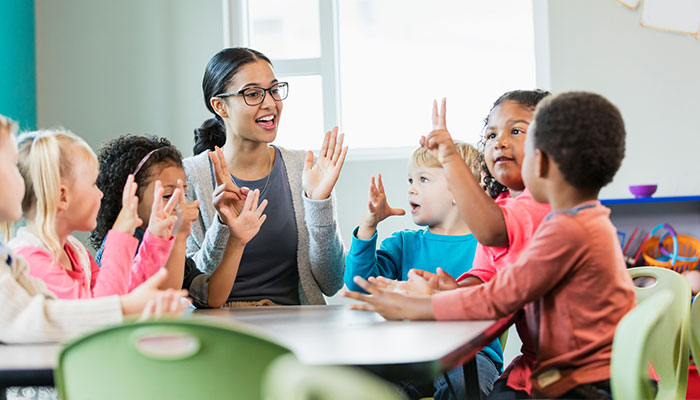 In person works: Macquarie research analysis has found that hand gestures from teachers convey meaning faster than speech by itself in a learning environment.

And in an unexpected discovery, the study found that adults benefit equally when gesture accompanies speech, suggesting that working from home may also impair the quality of adult-to-adult communication.

“Gesture is very important, and I think more important than people necessarily give it credit for,” says Department of Psychology Associate Professor Naomi Sweller, co-author with Macquarie PhD candidate Nicole Dargue of When our Hands Help Us Understand: A Meta-Analysis into the Effects of Gesture on Communication, published in the American Psychological Association’s Psychological Bulletin.

“There is a lot of research showing we can benefit from gesture, whether it reinforces the message or whether it provides some extra information, and I don’t think that comes through in an online environment, even with the best video conferencing tools available.

“Teachers have been doing an outstanding job, but there is no way around the fact that it is still just a headshot of the teacher talking, so any of that non-verbal gestural communication is simply not there, so kids have been missing a lot.”

While previous research showed that gesture benefitted children’s understanding more than that of adults, the meta-analysis revealed it is equally beneficial for everyone – the finding that most surprised Sweller.

“We don’t know a lot about the middle age group of adolescence, but in early childhood, primary and as adults, we all benefit from gestures.

“There is also evidence to suggest it is more beneficial when a task is difficult.”

Sweller explains that gestures can also work to provide shortcuts in communication, conveying meaning faster than speech by itself – which helps in a professional situation where efficiency is important.

“We use up a lot of mental resources trying to verbally work everything through. Some things can be conveyed much more quickly via a gesture, and although we may ultimately get to the same point just talking verbally, it can be far less efficient.”

Untangling how and when gestures work

Following its emergence as an area of study in the 1970s, research into gesture has proliferated only in the past 10 to 15 years, and Dargue and Sweller’s meta-analysis scrutinised 83 carefully selected studies into the benefits of gesture on comprehension. 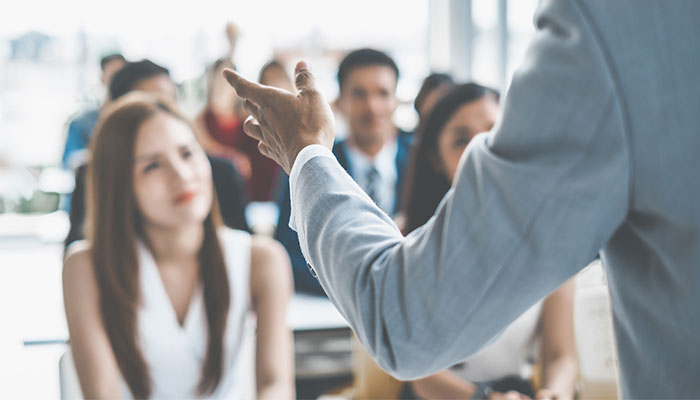 Memory aid: Macquarie researchers think gestures helps learning - even in adults - because it alleviates mental overload when taking in more than one thing at a time.

The researchers sought to untangle whether and when particular gestures assist in understanding.

They concluded that gestures on average were indeed beneficial to comprehension, whether produced or observed.

On the “when” question, however, they found that producing gestures while working through a task –such as a maths equation, or the events in a narrative – had a greater impact on comprehension than observing gestures in others, such as a teacher.

“We think that one of the reasons producing a gesture helps a learner is because we only have a certain amount of mental resources we can allocate to a task – that is, there is only a certain number of things we can think about at one time,” Sweller explains.

“We call this our working memory, and producing gestures helps alleviate the cognitive load on that working memory; basically, if we do something non-verbally, it is freeing up our cognitive resources for whatever else we are doing at the same time.”

The movements we use

Among these, iconic gestures have a concrete meaning, such as indicating an action or a size, that either overlaps with what is being said or provides additional information – for example, talking about a small ball while gesturing a small ball (overlapping); or talking about a ball and using gesture to show that it is a large one (additional information).

Beat gestures are rhythmic, flicking movements of the hand that accompany speech but have no direct linguistic relationship to it, instead serving to emphasise what is being said and focusing attention.

Diectic gestures involve pointing to indicate an event, direction or object, in the way that a teacher may point to an object they are describing, or the sides of an equation as they explain it.

While Sweller says it is yet to be understood which types of gestures are the most beneficial to produce, the meta-analysis did reveal – surprisingly – that no one kind of gesture was more beneficial to observe, contradicting previous findings that gestures semantically linked to speech – such as iconic gestures – were more effective than those such as beat and pointing gestures.

Ultimately, through better understanding of when gesture benefits comprehension, gesture can be more effectively implemented as a tool for teaching strategies and interventions alike, the researchers concluded.

Sweller says that if we know children understand more when a message is accompanied by gesture, it would make sense to do everything possible to foster that.

At the same time, however, “I wouldn’t go in there saying we have to tell the children to act out everything they are doing, that would cause pandemonium!”

Also, given gestures have existed for as long as humans have been communicating face to face, evidence suggests that natural gestures that have evolved with us are most effective when it comes to learning.

“We have to be careful not to make it too artificial,” Sweller says. She points to research by Nicole Dargue into iconic gestures that shows they are not all equally beneficial, and that iconic gestures that are naturally produced are more beneficial to comprehension than some other atypical gestures which, although they may portray the same point, aren’t what we would naturally produce.

“So yes, we should focus on our gestures in the sense of making sure we are using them in a useful way, but I would shy away from saying to teachers, make sure you’re doing lots of gestures all the time, because the worry would then be that they might produce these artificial gestures which won’t be as beneficial.”

Naomi Sweller is Associate Professor in the Department of Psychology at Macquarie University and co-director of the Centre for Children's Learning in a Social World.