Girls are taught physics differently to boys, a Macquarie research paper by Dr Carol Newall and colleagues has revealed. Her work underscores how societal stereotypes hamper more girls from studying science and perhaps partially explains why the Nobel Prize for Physics – awarded in October 2018 to Donna Strickland, Associate Professor at the University of Waterloo in Canada – has been won by only three women in its 117-year history.

Dr Newall’s research published in Contemporary Educational Psychology investigated what happened when the gender of a fictitious eight-year-old child was manipulated experimentally, and how this affected adults’ perceptions of the child's ability and enjoyment of science.

“We discovered that adults are already biased against girls by the time children are eight years old,” Newall says. “Even at that age, adults already have low expectations of girls’ potential in physics.”

In the experiment, Dr Newall and her colleagues asked 80 trainee teachers and psychology undergraduates to rate children’s academic capability based on common but fictional profiles of eight-year olds – girls who played with dolls; boys who played cricket and non-gender stereotyped children who liked swimming.

When they knew they were teaching a girl, they used less scientific talk.

Participants were also required to teach the fictional child a science lesson over Skype, but researchers manipulated the experiment so that the video connection was lost just as the trainees believed they were about to teach the child. 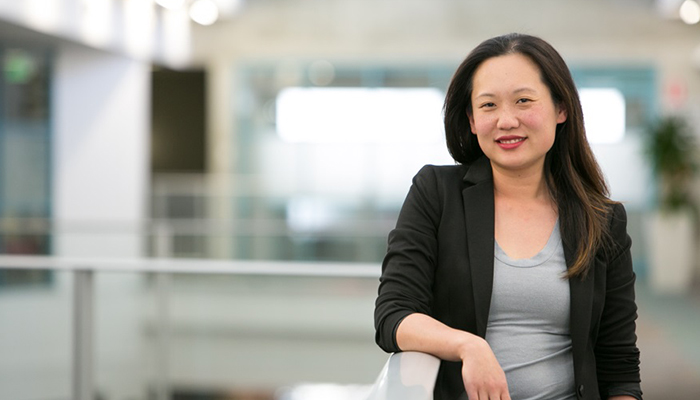 Shifting stereotypes: Parents have a role in encouraging children to take an interest in science at an early age, says Dr Newall.

“They were asked to continue teaching the child and we just recorded them - and got some really interesting results,” says Dr Newall, lead author of the study. “When they knew they were teaching a girl, they used less scientific talk.”

She says it is likely the participants were unaware of their bias, and had they known they had taught girls and boys differently, they would be surprised.

“Actually we are all affected by societal subconscious biases. The only way we can change this is by a cultural gender shift.”

The numbers of girls who study HSC physics illustrates this. In the final year of high school, seven percent of girls and 23.5 percent of boys study physics, according to Australian Institute of Physics (AIP) figures.

In university, female enrolment in physics undergraduate degrees has dropped to 21 percent today from 27.6 percent in 2002. The figures are similar in American and British universities.

Women are also underrepresented as physics teachers in schools and universities, and researchers in public and private laboratories. Women physicists usually have lower seniority and earn less, the AIP says.

Ask a girl to fix an engine

While government and companies are investing in STEM scholarships and enrichment activities to encourage girls’ participation, Dr Newall says a cultural shift will only happen when girls feel more “belongingness”.

“Parents should be mindful of the attitudes they promote at home, and role model a positive regard for maths and science."

“They don’t just need to know about famous women physicists but rather role models closer in age, successful girls in science at high school, so they can imagine themselves as scientists in the near future,” she says.

She also puts the onus on parents of preschoolers and primary-aged children to encourage them to join in non-stereotypical activities.

“Parents should be mindful of the attitudes they promote at home, and role model a positive regard for maths and science,” she says. “Even encourage your daughters to help you fix a car engine.”

Dr Carol Newall is a Senior Lecturer in the Department of Educational Studies.

This article was first published on 10 October 2018.